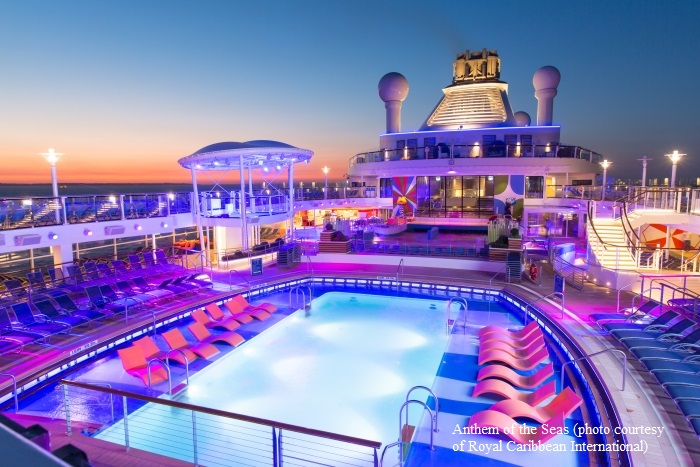 Royal Caribbean International announces the early release of the BOGO-Getter 2016 Wave Season promotion in celebration of the U.S. arrival of its newest ship, Anthem to the Seas, to Cape Liberty Cruise Port, Bayonne, NJ.— Vacationers who make new reservations before the end of the year on any ship across the fleet will receive up to $300 in onboard credit, 50 percent-reduced booking deposit — as low as $50 per person — as well as 50 percent off the second guest on all sailings through 2016 and 25 percent off third and fourth guests on Caribbean sailings January through May.— The discovery driven promotion applies to sailings departing on or after December 10, excluding China departures.

The international cruise line is putting the rich history of the Eastern and Western Mediterranean at the fingertips of culturally-curious guests by providing pre-paid gratuities and 50 percent off on third and fourth guests on bookings made for sailings on Jewel, Vision and Rhapsody of the Seas departing from Venice and Rome starting in April through November 2016.— In addition, free VOOM — the fastest internet at sea — will allow guests to stream and share summer travel adventures in real time from Europe and the Caribbean onboard Anthem, Harmony, Allure, Oasis, Freedom, and Enchantment of the Seas, from May 1 — Sept. 30.

Harmony of the Seas will be the first in a new generation of ships where groundbreaking architectural innovations of the Oasis class are combined with breakthrough technologies of the Quantum class. The inaugural summer season will showcase Europe’s most popular destinations on seven-night Western Mediterranean itineraries, before the ship arrives in November 2016 at Port Everglades in Ft. Lauderdale, Fla. offering seven-night Eastern and Western Caribbean sailings.

Book by December 30, 2015 to take advantage of Crystal EValues
Scroll to top