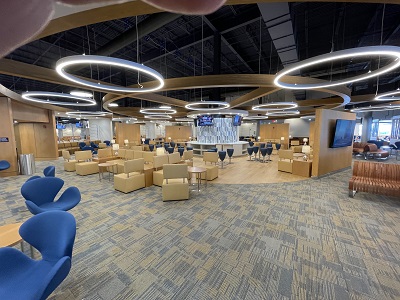 by Gerry Barker
PORT CANAVERAL (July 31, 2021) — The sheer joy of the moment couldn’t be overstated. Not only was Carnival about to debut the largest cruise ship in its fleet, but also this port was about to see its first ship depart in 16 long months. Not to mention Pam and I were about to set foot on our first cruise ship in about the same amount of time.

Happiness was evident all around, and nowhere more so than on the face of Carnival President Christine Duffy, who welcomed a select group of guests, travel agents and media onboard to preview Mardi Gras, Carnival’s latest and greatest, one day before her maiden voyage on July 31.

We spent a full day touring this new megaship, the first in America powered by eco-friendly LGN (liquified natural gas). Weighing in at 180,000 GT, she can accommodate up to 6,500 passengers, with a crew of 2,000. And did I mention she’s also the first ship to feature a roller coaster? The first of three planned, Excel-class ships, her long-delayed launch is a big deal for Carnival, in every sense of the word.

Our day started in Terminal 3. Built at a cost of over $160 million, it combines elegance, functionality and technology in a new, state-of-the-art facility. As expected, strict COVID protocols were in effect. Participants had to complete health forms, a health questionnaire and present proof of vaccination to board. Given the extra steps, we still navigated security in quick order and headed for the ship.

On the way, we passed the new lounge reserved for guests who book suites. With its bright-colored sofas and chairs and overhead TVs, it makes waiting to board a pleasure. Carnival utilizes facial recognition for the boarding process. Yes, we smiled.

We entered to the cheers of Carnival employees, who no doubt were sincerely happy to see actual guests arrive in advance of an actual cruise. Mimosas-in-hand, we made our way to the Grand Atrium, where Ms. Duffy would kick off the day’s festivities with the help of Cruise Director Chris Williams and Carnival staffers.

Unlike other ships, the atrium is located on the side of the ship, which means its multiple, revolving screens can serve as a 30-foot backdrop for entertainment or during days at sea, open up to display an ocean vista in all its glory.

She called Mardi Gras “truly a game-changer,” and the fifth Carnival ship to resume sailing since the pandemic started, during which she said Carnival had to cancel or reschedule “three million reservations.” In the next two months, 15 ships — over half the fleet — would be back in service.

After that high-energy sendoff, guests were directed to Deck 19, where the aforementioned roller coaster, Bolt, would make its official debut. Riders travel — two-per-car — an 800-meter track that loops high over the top deck. There are height and weight restrictions, as well as dress restrictions, and a ticket-to-ride will cost $15 for two loops around, which typically go by in under 60 seconds.

While it looked exhilarating, the line to try Bolt got long pretty fast, and it was plenty hot despite the shade. With so much more to see and experience, I decided to save Bolt for another day.

The first thing to say about Mardi Gras is the ship is stunning. From the water park and pools to the restaurants, spa and staterooms, it’s first-class and beautifully executed. The ship boasts six “zones:” Grand Central, The French Quarter, Summer Landing, Lido, La Piazza and The Ultimate Playground.

As all cruisers know, dining and food are right there at the top of any cruise experience, and Mardi Gras delivers enough choices — both included and specialty — to satisfy any foodie. To that end, tastings were set up in various dining venues, and with lunch beckoning, we were off to explore and experience.

Our first stop was Big Chicken on Deck 16, by the Tides Pool and Bar. It gets its name from Carnival’s Big Fun Ambassador, Shaq himself, whose photo graces one wall. We had chicken strips with Shaq sauce, along with potato salad and bread and butter pickles. Honestly, it was one of the most enjoyable meals of the day, and there’s no extra charge to boot.

While on Deck 16, we made our way to the next stop, Street Eats, also included with your cruise, featuring a trip of choices: Pork dumplings at Steam Dream, satay at Mad Sizzle and Philly cheeseburger fries at Time Fries. Selections change daily, so there will likely be something to satisfy every taste.

You’ll find the majority of dining options on decks 6-8, including:

— ChiBang! Where Chinese and Mexican meet on the same menu.

— Rudi’s Seagrill.  A new addition from master chef Rudi Sodamin, this specialty restaurant should be the answer to seafood lovers’ dreams, offering an upscale dining experience.

— The Carnival Kitchen stages cooking classes. Guests pay $30 for one-hour courses. With only 10 minutes to work with, we were only able to watch the Carnival chefs make macaroons, but did get to taste the results.

Of course, Carnival mainstay Guy Fieri is well-represented with both his Burger Bar and Guy’s Pig and Anchor. We should also mention those donuts from the Javablue Cafe are just scrumptious.

If you like lots of private deck space to relax or take a dip in a hot tub, book the Excel Presidential Suite. If that’s not available, the Havana Cabana staterooms and suites aren’t a bad second choice, with its own private space as well.

The Cloud 9 Spa offer two floors of relaxation and therapy. There’s also Serenity, the adults-only area we enjoy, and don’t miss the infinity pool on The Patio, deck 6 — a perfect spot to sip a cocktail and watch the waves go by.

There’s a lot here for shopaholics, including some first-at-sea shops. But sadly for Pam, they weren’t open. We didn’t have a chance to sample the theater shows, which will include the first at-sea edition of Family Feud. That should be fun to watch.

In the afternoon, there were ribbon-cuttings for the Heroes Tribute Bar & Lounge, honoring America’s military and their families, as well as a floral statue highlighting Carnival’s partnership with St. Jude Children’s Research Hospital.

One feature I thought was special is the wall plaque comparing the original Mardi Gras, Carnival’s first ship, launched in 1972, to the new Mardi Gras. A picture truly does say a thousand words.

All too soon, the tour was coming to an end, and so much left to see. We opted for one last drink in the French Quarter, at the Brass Magnolia, a bar set amid a wall of decorative palm fronds. As we sipped our perfectly-made French 75s, the Beelays, a trio from Ontario, Canada, played a jazz selection from the Red Hot Chili Peppers. If you sail Mardi Gras, don’t miss these guys. They are there for the next five months.

As we made our way off the ship, we thought about the next day, when over 4,000 guests would be making their way onboard through Terminal 3, for Mardi Gras’ first-ever sailing. Prepare, as they say, to be wowed.

Mardi Gras is making two, seven-day itineraries to the Caribbean from Port Canaveral.

CruiseCompete travel advisors can assist with details and sailings here:

Kicking off Preview Day in the Grand Atrium

A car races by on the Bolt roller coaster