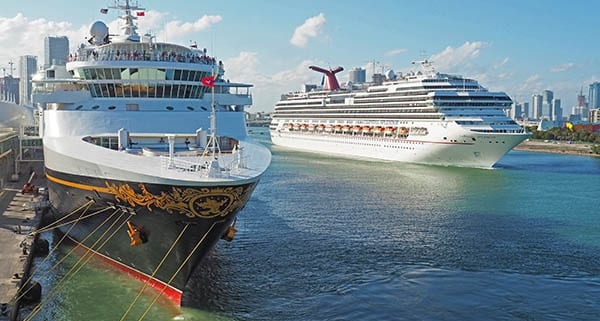 Supporting Hundreds of Thousands of Passengers Sailing Outside the U.S.

Courtesy of Cruise Lines International Association (CLIA): WASHINGTON, DC, March 24, 2021 –CLIA, which represents 95% of global ocean-going cruise capacity, today called on the Centers for Disease Control and Prevention (CDC) to lift the Framework for Conditional Sailing Order (CSO) and allow for the planning of a phased resumption of cruise operations from U.S. ports by the beginning of July. The early-July timeframe is in line with President Biden’s forecast for when the United States will be “closer to normal.”

“Over the past eight months, a highly-controlled resumption of cruising has continued in Europe, Asia, and the South Pacific—with nearly 400,000 passengers sailing to date in more than 10 major cruise markets. These voyages were successfully completed with industry-leading protocols that have effectively mitigated the spread of COVID-19. Additional sailings are planned in the Mediterranean and Caribbean later this spring and summer,” said Kelly Craighead, CLIA’s President and CEO.

According to the trade association, the very small fraction of reported COVID cases (fewer than 50 based on public reports) is dramatically lower than the rate on land or in any other transportation mode. “This is a testament to the industry’s unparalleled expertise, gained over more than half a century, in coordinating movements of guests and crew, efficiently organizing complex embarkations and excursions, and designing vessels that are more technologically advanced and operationally agile than any other mode of transportation,” said Craighead.

“The cruise industry has adopted a high bar for resumption around the world with a multi-layered set of policies that is intended to be revised as conditions change. Our Members continue to follow this multi-layered approach to enhancing health and safety that has proven effective, making cruising one of the best and most adaptable choices for travel,” she added. Craighead also noted “the accelerated rollout of vaccines is a gamechanger in providing for the health and well-being of the public, especially in the United States, where President Biden expects all adults will be eligible for vaccinations by May 1, 2021.”

Following the industry’s voluntary suspension of operations one year ago, cruise lines have been prevented from operating in the U.S. by a series of “No Sail Orders” issued by the CDC. The CSO was issued last October, but since then the CDC has not released any further guidance, as called for in the CSO, to support the resumption of U.S. cruise operations. The lack of any action by the CDC has effectively banned all sailings in the largest cruise market in the world. Cruising is the only sector of the U.S. economy that remains prohibited, even as most others have opened or continued to operate throughout the pandemic.

“The outdated CSO, which was issued almost five months ago, does not reflect the industry’s proven advancements and success operating in other parts of the world, nor the advent of vaccines, and unfairly treats cruises differently. Cruise lines should be treated the same as other travel, tourism, hospitality, and entertainment sectors,” Craighead emphasized.   While some cruise lines have announced a few sailings catering to those who have received vaccinations, CLIA does not currently have a policy related to vaccines. The organization and its members are exploring a workable approach for how to consider vaccinations, once widely available, as part of robust protocols.

According to CLIA, restarting cruises as part of the broader travel industry will provide a much-needed boost to the U.S. economy—with the cruise industry supporting nearly 450,000 American jobs and contributing over $55.5 billion annually, prior to the pandemic.  Based on economic modeling by research firm BREA, more than 300,000 jobs

have been lost in the United States due to the suspension of cruises. The majority of those impacted are independent business owners or individuals employed by small- to medium-sized businesses—including travel agents, taxi drivers, port employees, baggage handlers, and longshoremen, as well as airline, hotel, and restaurant workers.

CLIA is the world’s largest cruise industry trade association, providing a unified voice and is the leading authority of the global cruise community. On behalf of its members, affiliates and partners, the organization supports policies and practices that foster a secure, healthy, and sustainable cruise ship environment, promoting positive travel experiences for the more than 30 million passengers who have cruised annually. The CLIA community includes the world’s most prestigious ocean, river, and specialty cruise lines; a highly trained and certified travel agent community; and a widespread network of stakeholders, including ports & destinations, ship development, suppliers, and business services. CLIA represents 95% of the world’s ocean-going cruise capacity, as well as 54,000 travel agents, and 15,000 of the largest travel agencies in the world. The organization’s global headquarters are in Washington, DC, with regional offices located in North and South America, Europe, Asia, and Australasia.

Royal Caribbean Ships To Sail Soon From Bahamas and Bermuda

Cyprus Welcomes Royal Caribbean to the Mediterranean This Summer …
Scroll to top
Posting....